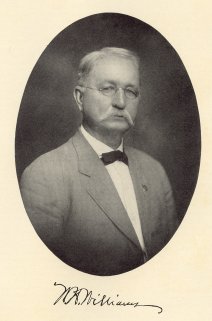 WILLIAM H. WILLIAMS. It has been said that the poet is born, not made, but the successful lawyer has to be both born and made _ made by close application, earnest effort, by perseverance and resolute purpose. The abilities with which nature has endowed him must be strengthened and developed by use, and only by merit can he gain position. William H. Williams is a lawyer of unusual ability,_one of the best known in the state, in truth his practice being over all Southern Illinois. He is a leading Republican and in great demand upon occasions when eloquence is in order, particularly so in campaigns. He now holds the office of president of the Franklin County Illinois Bar Association. He is a former county judge of splendid record and a veteran of the Civil war.

Judge Williams was born in Princeton, Indiana, April 15, 1845, and is the son of Eli and Margaret M. (MeKutchin) Williams. Both parents were the offspring of Southern families, the father having been born in Guilford county, North Carolina, in 1810, and the mother in South Carolina, in 1820. Eli Williams removed to the Hoosier state with his parents in 1822, their location being made in Gibson county, that state, and there he made his home for the remainder of his days, his summons to the Undiscovered Country coming in 1882. He was a carpenter and joiner by trade. In his earlier life he was an enthusiastic Democrat, but subsequently he transferred his allegiance to the Republican party. His father, Lemuel Williams, was born in Virginia, but removed thence to North Carolina and subsequently to Indiana. In the South he was a planter and slave-owner, but when he removed to Indiana it was a case of "Othello's occupation's gone" and he courageously adapted himself to new conditions and engaged in the carpentry trade, which he followed until his death, in 1863, at the age of ninety-four years. This fine old patriarch, whose mind and energy so long retained their pristine vigor, was a veteran of the Seminole war. The

subject's maternal grandfather was a South Carolina farmer, who came to Indiana when the state was a wilderness and he was killed by a falling tree when engaged in clearing his land. The

Williams family is descended from Roger Williams, founder of Rhode Island and apostle of religious toleration (born 1600 in England; died in Rhode Island about 1684). The mother of the subject was a devout member of the Covenanter church.

William H. Williams was educated in the public schools of Gibson county, Indiana, and entered the Federal army at the age of sixteen years, his service extending throughout the period of the great conflict. He was a member of Company F, Thirty-third Indiana Volunteer Infantry, and was in all the principal engagements of the Western Army. He was on the famous march to the sea and served first under General Gordon Granger and later under General Hooker. He was captured at Spring Hill, Tennessee, and was in Libby prison for nineteen days and was among the last troops exchanged in April, 1864. After the affair at Appomattox Mr. Williams, who was then only at his majority, returned to his Indiana home and completed his education in the academy at Princeton, Indiana. In 1866 he came to Benton, Illinois, and there began his preparation for the profession which he was in after years to adorn. He first attacked his Blackstone under the able preceptorship of S. E. Flannigan and then attended the law school of A. D. Duff, a noted law instructor of Southern Illinois. In 1867 he was admitted to the bar and he entered upon his practice in the United States Circuit Court in 1882. He has a very large practice and enjoys the esteem of laity and profession, his reputation not being limited by the boundaries of the state. As previously mentioned, be is president of the Bar Association of Southern Illinois and he has the distinction of being Nestor of the Franklin County Bar.

Judge Williams has always taken a keen interest in politics and in all that concerns the public welfare. He is a tried and true Republican, since his earliest voting days having supported effectively the men and measures of the Grand Old Party. He is a logical and inspiring speaker and has made campaign speeches over all Illinois and Indiana. He was elected county judge of Franklin county in 1879, when the county had a nominal Democratic majority of over seven hundred, and he was re-elected in 1882, when the Democratic majority was over five hundred, the affair being a great personal victory. In this important office he served with distinction and satisfaction to all concerned. He has a fine legal mind and no one could be better fitted for his profession than he.

In 1869 Judge Williams was united in marriage to Margaret Akin, deceased, daughter of Walter S. Akin. Two children were born to this union, namely: Walter H. and Lora, the latter of whom became the wife of James M. MeGuire. On January 5, 1900, the subject took as his wife Bettie Whittington, daughter of Wiley Whittington, and her demise occurred in August, 1909. Fraternally Judge Williams belongs to the Odd Fellows and the Grand Army' of the Republic, and finds great pleasure in renewing old memories with tbe comrades of the `60s. In both organizations he has filled all the offices.