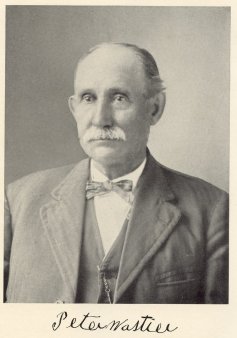 Southern Illinois has recruited some of its leading financiers from the agricultural districts, men who have spent the major portion of their lives in farming and then, on retiring from that vocation, have taken up their residence in the cities and villages, where they have made their abilities and influence felt in various lines of endeavor.

Prominent among this class may be mentioned Peter Wastier, president of the Johnston City State Bank, who has retired from agricultural pursuits and is actively and prominently connected with the financial interests of Williamson and Franklin counties. He was born on the border line of St. Clair and Madison counties, Illinois, December 16, 1841, and is descended from Franco-German parents.

The father of Mr. Wastier, also named Peter Wastier, was born in Alsace-Lorraine, Germany, at that time French territory, and he came to the United States in young manhood, locating in the St. Louis region of Illinois. He was married in Madison county, it is believed, to Mary Wesser, who died in 1846, while he survived until 1861, and was about seventy years old at the time of his death. He was a laborer, humble in his home and without pretentions, and left only a good name as a heritage for his children. The issue of his marriage were: Faldine, who reared his family at Belleville, Illinois, and died there; Michael, who was drowned as a young and unmarried man; Mary, who became Mrs. Reinbolt and lived in Minnesota; Henry, who never reached mature life, and Peter, of Johnston City.

Peter Wastier inherited a vigorous physique, plenty of industry but little disposition to seek knowledge. Opportunities were not numerous then, as now, yet what few passed near him were brushed aside and he came to maturity barely able to read and write. He made his home with his uncle during the last years of his youth and accompanied him into Williamson county. They reached here in 1859, and settled on a farm some three miles north of the site of Johnston City. In that vicinity Peter located when he was married, and there he made his industry count as a farmer for forty years. Nature provided him with an aptitude for business and a general atmosphere of thrift prevaded his life from the beginning, and he amassed a competence long before he reached the evening of life. When the railroad built through the county and made a station at Frankfort, he took advantage of the opportunity to realize the possibilities of building a town there, and subsequently bought land adjacent and laid off one addition after another until Was-tier's Ninth Addition to Frankfort was platted and disposed of. He became connected with a movement to locate a bank there, and was made president of the Frankfort State Bank. Having more than met his expectation from Frankfort, he invested in property in Johnston City, did a little building here, and moved to the city in 1902. His known standing and business acumen prompted his associates in the Johnston City State Bank to elect him president of their institution, and he has occupied that position from its organization.

Although his age and health would have warranted it, Mr. Wastier was not connected with military affairs of his state during the Civil war. He lent his sympathy to the Federal cause, and, although a civilian, had an experience in the fall of 1863 with a squad of robbers passing through the country under the disguise of soldiers. As events subsequently revealed, they were "bushwhackers," bent on loot, and before they reached the home of Mr. Wastier `s uncle they decoyed two neighbors away from their homes and murdered them on the pretense of having them show the way. This ruse failed of accomplishment at the Wastier home, and when they appeared and stated they wanted their horses fed and something to eat themselves, Peter refused to go to the barn to feed the horses. They then stated that they did not want money but were waiting for food, but Peter slipped outside with a sixshooter concealed under his coat and awaited developments through the door. Presently he heard the "soldiers" make a demand on his aunt for money, and he at once opened fire on the robbers and in turn was

shot at by them. But the robbers were as badly frightened as the youth and his aunt and made their escape without accomplishing their designs.

On May 30, 1864, Mr. Wastier was married in Williamson county, to Miss Barbara Rigel, who died in February, 1906, leaving these children: Minnie, who died unmarried; Caroline, the wife of Henry Baker, a farmer of this county, and Lucy, who married John Hook, and resides near Johnston City, on a farm. In February, 1909, Mr. Wastier was married to Mrs. Annie Gardner, in Evansville, Indiana. She has one daughter by her former marriage, Mrs. Lula Laubscher, the wife of Edward Laubscher, a photographer of Johnston City.

Although Mr. Wastier was brought up under church influences, he has not identified himself with any orthodox denomination. His people were Lutherans and his attitude is that of a disinterested spectator of the work of the church. Fraternally, he is a member of the Blue Lodge of Masonry, and his political views are those of the Republican party. Mr. Wastier has never faltered in his upward course nor allowed himself to be discouraged, but has pushed steadily onward, and now is connected with some of the most substantial institutions in the county, and is recognized as one of the most progressive men of his part of the state.