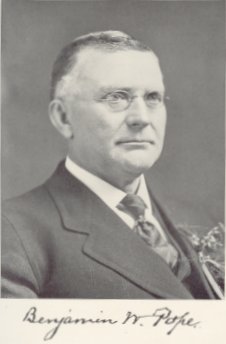 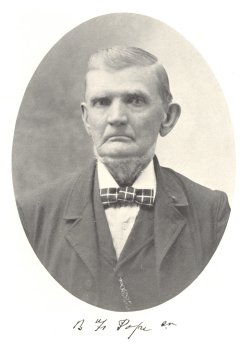 JUDGE BENJAMIN WINFIELD POPE is a representative of that numerous and brilliant family who have been identified with Franklin county since their ancestors established themselves there during the early part of the nineteenth century. Pope's Prairie, named in honor of them, marks the locality where they first settled. From this first family has

sprung a long line of men who have made a place for themselves in the legal and medical professions, as well as in the business world. Of this number Judge Pope holds a prominent place. Judge Pope has been called upon to serve in many offices, both politically and in a judicial capacity. His contact with many men has thus given him a broad insight into the conditions and motives that influence the deeds of his fellow men, consequently with his broad knowledge of the law he is able to act with so true an understanding and with so clear a mind that justice is synonymous with his court, a rather unusual thing in these days of corrupt judges and packed juries.

Benjamin Winfield Pope was born in Franklin county, on the 20th of October, 1853, his father being Dr. Benjamin F. Pope, Sr. His grandfather was Benjamin Pope, a distiller, who spent all of his days near Dresden, Tennessee, where Dr. Pope was born on the 24th of May, 1825. The latter lived in Tennessee until 1849, when he migrated to Illinois and started on the medical career for which he had been prepared in his native state. The only other member of the family to come hither was a brother, Dr. H. B. Pope, who spent his life in Franklin county, and left on his death a large family who have become prominent in the life of the county.

Dr. Benjamin F. Pope gave the vigorous strength of his early years to his medical work, and built up a large and flourishing practice He won a broader reputation, however, as a citizen filled with the "milk of human kindness," and when his practice came to be too large and heavy a burden he abandoned it and came to DuQuoin to engage in commercial pursuits. He came to DuQuoin on the 2nd of January, 1865, and became a member of the firm of Pope and Company, dealing in General Merchandise. After a few years devoted to this business he went into the retail lumber business, which formed his occupation during the remainder of his life. He bought the beautiful property at the corner of Mulberry and Franklin streets in DuQuoin, and here he died on the 23rd of January, 1902. His most striking characteristic was his genuine sympathy and interest in the poor, afflicted and unfortunate, and he never refused to help those who were suffering, lie was especially kind to the negroes who came his way, feeling a great sympathy for his weaker brethren, who were unable to cope with the intellect and experience of the white race.

On the 4th of February, 1849, Dr. Pope married Emeline Harrison, a daughter of Benjamin W. Pope. She was his second cousin, and was born in Bedford county, Middle Tennessee, on the 8th of June, 1828. She is now spending her declining years in the happy companionship of her son, the Judge. She and Dr. Pope became the parents of five children, three of whom are living: Byron J. died when a young man; Pleasant V. is a merchant of DuQuoin; Ida I. also died in youth; Benjamin W.; and Sarah E., who is the wife of G. F. M. Ward, of Mt. Vernon, Illinois. From the nature of his calling Dr. Pope was a man of wide acquaintance, and to know him was to be numbered among the ranks of his friends. He made no pretense to religion, but probably followed the Golden Rule much closer than some who attend services every Sunday. He was moderately interested in fraternal organizations, being a Master Mason.

Judge Pope was educated for a professional career, what shape this should take being left for him to decide. He was a student in the University of Illinois, in Washington University at St. Louis, and finally graduated from the law department of the Union College of Law in Chicago, in 1878. On his return home he expected to immediately begin to practice, but the spirit of altruism, which was so strong in his father,

cropped out in the son. The public schools had fallen into a bad condition and since no one seemed very anxious to straighten out affairs Judge Pope took the task upon bimself. For two years he acted as superintendent and at the end of the time was thankful to doff the garb of a school master and don the cap and gown of the lawyer.

He opened a law office in 1880 and went industriously to work to make up for lost time. His success attracted the attention of his party to him, and he was appointed to fill out an unexpired term as state's attorney. Following this he was elected county judge and served one term. When President Cleveland went into office he appointed Judge Pope postmaster, and he served as such for fifty-one months, taking office during the second term of President Cleveland's administration. He succeeded E. M. Harris and was succeeded by Harry B. Ward. In 1899 the people showed their appreciation of the faithful services that he had rendered by electing him mayor, and it was while he was the incumbent of this office that the sewerage, water-works and electric light systems were installed. He served as mayor eight years at DuQuoin In 1909 he was elected city judge, a position with unlimited jurisdiction, and he is well known and popular in the circuit court districts of Chicago, East St. Louis and Southern Illinois as a trial judge.

He is a Democrat without intense partizenship, and fraternally is affiliated with the Knights of Pythias and the Eagles. He is unmarried, devoting his life to the comfort and well being of his mother. The long line of offices which he has held speak for themselves and show how high he stands in the regard of his fellow citizens. His highest ambition is to uphold the law and see that justice is done to rich and poor alike.