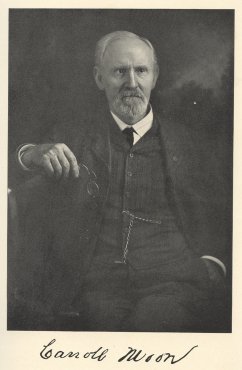 CARROLL MOORE. Among the men to whom Southern Illinois may look for the prosperity that blesses the region there is a man who for many years has served the community by guiding and supporting the business interests of this part of the state, and in his capacity of banker and capitalist has ever yielded the most active personal and financial support to every enterprise advanced for the public interest. He has seen the country pass through panics and hard times; he has watched the growth of the early agricultural district into a still more fruitful farming region and into one of the most progressive business sections in the state; and he has ever lent his wisdom and grasp of complicated situations to the building up of stable institutions and the management of affairs.

Carroll Moore was born in Franklin county, Illinois, on the 1st of September, 1837, whither his parents had come three years before. His father and mother, Joseph and Mary Moore, both natives of Tennessee, came to Illinois in 1834 and camped for a time on the banks of Jordan fort until they were able to take up a tract of land for cultivation. When they got their homestead it was heavily timbered. With typical Moore energy and enthusiasm, they cleared their acreage and continued to manage their farm well. They made their permanent home in the county, and lived here all their remaining lives. Joseph Moore passed away in 1848. He was the son of Thomas Moore, another early settler in this region, who also took out land in Franklin county in the year 1834, and spent the remainder of his days on a farm. Joseph Moore had a most valorous record for service during the Black Hawk war, one of the most interesting and thrilling pages in the history of Illinois.
Carroll Moore, the immediate subject of this short personal record, spent his early life on his parents' homestead and received his education at the common schools of the county. He was still a school-boy at the breaking out of the Civil war, but though young he had a man's enthusiasm and interest in the cause, and in 1861 he helped to raise a company, Company I of the Thirty-first Illinois Infantry, and was subsequently elected its captain and served in the Union army until January, 1865. He was in a great many serious engagements and many times distinguished himself as a commanding officer. He was present at Belmont, Fort Henry, Fort Donelson, and led his company throughout the Vicksburg and Atlanta campaigns and was with Sherman on that never-to-be-forgotten march from Atlanta to the sea. On the 22d of July, 1864, during a serious encounter at Atlanta, Georgia, Captain Moore was wounded, but he continued to hold his place in the service, not even leaving his command to go to the hospital. At the close of the war he returned to Illinois and started life on a little farm; but that he left in the fall of 1865 to become deputy internal revenue assessor, and in this capacity he served the Federal government until his election, in 1870, to the office of sheriff. As sheriff Mr. Moore served two years, meantime buying a great deal of land. In 1873 he decided to enter the mercantile field and accordingly went into the dry-goods business with W. R. Ward as partner, and continued to be so engaged until 1875, when he and his partner started the Ward and Moore Bank, the first bank to be established in the country, and the only monetary institution of its kind here for twenty years.
In January, 1898, Mr. Moore and his associate organized the Benton State Bank, Mr. W. R. Ward being elected its president and Mr. Moore its vice-president, The bank has since become known as the strongest and most reliable financial institution in this part of the state. Mr. Moore has since become its president. The institution is capitalized at fifty thousand dollars and has a surplus of sixty thousand. Its average yearly deposits amount to four hundred and fifty thousand dollars.
In 1863 Mr. Moore was united in marriage to Miss Narcissa Layman, daughter of John D. Layman, one of the early stalwart pioneers of Franklin county. She passed away three years later, in 1866, survived by one child, William E. Moore, now a prominent merchant of Benton, Illinois. In 1873 Mr. Moore was again united in marriage, his bride being Miss Dora Snyder, the daughter of Solomon Snyder, one of the earliest and best-known settlers in Franklin county, Illinois. It is interesting to note that when Mr. Snyder first came to Franklin county it was still a virgin wilderness and almost unpopulated save for the remnants of the Indian tribes that had formerly held sway. He made a business of buying and dressing hogs, selling them at two dollars and a

half a hundred pounds. His daughter, the wife of Carroll Moore, died in 1893. She was the mother of the following children: Mary Moore, who became the wife of W. W. Williams, a well known attorney and mining man; Harry, now prosperously engaged in the mining business; Grace, bookkeeper in the Benton State Bank; and Cicel, single, is in the Christian College in Missouri, class of 1912. In 1898 was solemnized the marriage of Mr. Moore to Helen A. Hickman, daughter of Dr. Z. Hickman, one of the most successful and trusted physicians of the county. To this union have been born two children, Madge and Carroll. Both are attending school. Mrs. Moore is a member of the Baptist church, and her husband is an active member of the Christian denomination.
It is interesting to note that Mr. Moore has been a member of the Ancient Free and Accepted Masons for over forty-five years and is a chapter Mason. He is also a member of the Benevolent and Protective Order of Elks and of the Grand Army of the Republic.
Politically he has all his life been an influential member of the Republican party, lending his energy gladly to forward the interests of the party he thinks most dedicated to the general welfare. He served a term of four years on the state board of equalization, and was one of the commissioners that placed the monuments on the soldiers' graves in the National Cemetery at Vicksburg, Mississippi.
Mr. Moore at present devotes the greater part of his time to his extensive farming interests, for he is keenly interested in the future of scientific farming in Illinois. He is not only one of the wealthiest but one of the best liked and most public spirited citizens in Franklin county, and his name has been associated with almost every large undertaking that has led to the betterment of conditions in this region for over forty years.