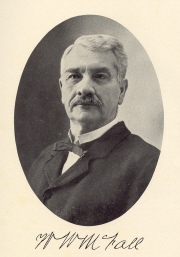 WILLIAM W. McFALL. The city of Benton, Illinois, is fortunate in that it has been made the field of operations of some of the most prominent and wealthy business men of Southern Illinois, for in this way its industrial and commercial future is assured and the growth and development of its interests made sure. A number of these men have been the architects of their own fortunes; economists claim that the only men worth considering are those who have developed their characters and fortunes without outside assistance. Experience seems to prove that it is such men as these who are self-reliant and purposeful and can be depended upon in any crisis that may come to the country or community. One of the successful business men of Benton who certainly belongs to the self-made class is William W. McFall, who was born August 31, 1844, in Williamson county, Illinois, a son of John and Jane (Cantrell) McFall.

John McFall, the grandfather of William W., was born in North Carolina, where he was a planter and slave-holder. Deciding to go to Tennessee, he sold his slaves and property, accepting state money, which he found to be worthless when he reached his destination. Although well along in years, he did not allow his misfortunes to dishearten him, and set out to make a new start in order to provide for his family, which, after many hardships, he eventually succeeded in doing. His death occurred in Tennessee. His son, also named John, was born in North Carolina, and was a child when he accompanied his parents to Tennessee. As a young man he became engaged in the flat-boat business

on the Cumberland River down to New Orleans, but in 1840 sold his interests and came to Williamson county, Illinois, where he bought out an improvement, which he proceeded to farm. In 1853 Mr. McFall bought his first government land, but sold it in 1856 to move to Benton, then a small village. He continued to farm, however, and in 1865 and 1866 was engaged in the mercantile business, and his death occurred in 1871. He was a stanch and active Democrat in his political views, but was never an office seeker, and was faithful member of the Methodist church. His wife, who died in the faith of the Baptist church in 1863, was a daughter of Richard Cantrell, a native of Tennessee and the progenitor of the well-known Cantrell family of Franklin county.

As a youth William W. McFall was not given many educational advantages, although he attended the Benton schools for some time, but the most of his schooling was secured in the school of hard work. Early in life he displayed marked business ability and the happy faculty of making money. his first venture of a business nature was in the woolen mill and cotton gin enterprise, in which he was successful, and in 1872 he sold his interests at a healthy profit and engaged in the flour milling business with John Ward, with whom he built one of the first mills in Franklin county, this later being rebuilt as a roller mill. After continuing with Mr. Ward very successfully for some time he sold his interest and engaged in a livery business, and for eight years had the contracts for carrying the mail on some of the leading routes, then engaging in lumbering with Ward & Moore, under the firm name of Ward, Moore & McFall. After some years spent in the flour mill, sawmill and timber business he contracted to furnish the timber for the Chicago & Eastern Illinois Railroad in the construction of that company `s track from Mount Vernon to Marion, and this proved to be a very successful enterprise, netting him a handsome profit. In 1897 he went into the general hardware and implement business, which has since been incorporated under the name of the MeFall Hardware Company, with Mr. McFall as president and A. L. Esken, vice-president and general manager, and this business is now the largest of its kind in Franklin county. In addition Mr. McFall owns a large amount of city property and farming lands, and takes great pride in the achievements of his city and county. He is a member of the board of local improvements, and a leader in movements calculated to be of benefit to Benton. In 1902 he helped to organize the First National Bank of Benton, becoming its first vice-president, a position which he held until he was elected president in 1912, and this is now one of the strongest financial institutions in the southern part of the state, having a capital of fifty thousand dollars, a surplus of a like amount, and deposits aggregating over two hundred and fifty thousand dollars. In political matters he has always been a Democrat, but he has given his time and attention to business rather than to politics, and has never desired public office. Everything with which he has been engaged has turned out successfully, but it has been the characteristics of the man which have made him, not the development of his surroundings. He is the sort of a man who would have been successful at any time, in any place, at any sort of enterprise. His career is worth study, and will b6 of benefit to the aspiring members of the rising generation.

In 1867 Mr. McFall was married to Miss Helen A. Denning, daughter of Judge William A. Denning, who sat on the circuit bench of Franklin county for a number of years, and was an early settler and very prominent Democrat of this section. Five children have been born to this union, namely: Hallie, Maude, Gussie, William and Pearl, of

whom William is now deceased. Mrs. McFall died September 1, 1906, in the faith of the Methodist Episcopal church, of which Mr. McFall and his children are consistent members and liberal supporters.