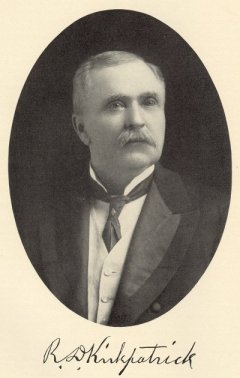 R. D. KIRKPATRICK. A man whose personality is indelibly stamped upon the history not only of Franklin county and southern Illinois, but that of the whole state is Mr. R. D. Kirkpatrick, one of Benton`s most distinguished and public spirited citizens. He wields a commensurate influence not only as an individual whose commercial interests are extensive and of an important character, but is also recognized as a man of strength and high ability in political and economic bodies, his long membership in the Illinois state legislative assembly and on important committees of that body giving him an unusual degree of prestige and power.

Franklin county is proud to claim Mr. Kirkpatrick as one of its native sons, his birth having occurred near West Benton on March 30, 1842. His parents were John F. and Hester Ann (Dial) Kirkpatrick, both of whom were natives of Tennessee and had the same birth year, 1819. They came with their parents to Franklin county, Illinois, when they were children, were later married here and continued to live upon the farm throughout the remainder of their lives. The father's demise occurred in 1868, while the mother lived to a good old age, the date of

her death being December 31, 1899. The paternal grandparents of R. D. Kirkpatrick were Edward V. and Clarissa (Farris) Kirkpatrick, of southern birth, who were early pioneers of Franklin county. Edward V. was a participant in the Black Hawk war. Our subject's maternal grandfather, Dial, was a Tennesseean who became a Franklin county pioneer settler.

The common schools of Franklin county furnished the opportunity for R. D. Kirkpatrick to secure sufficient learning to enable him to pass the necessary examination for a teacher's certificate, and during the two years previous to the breaking out of the Civil war he followed the pedagogical profession. When the call was made for volunteers he patriotically responded to his country's need and enlisted in Company F, Sixty-third Illinois Infantry, and served as a non-commissioned officer for three years during the conflict. He took part in numerous important engagements, including those at Vicksburg and Missionary Ridge, and the battle at Bentonville, N. C., and was also a member of that army of Union men who made the famous March to the Sea led by General Sherman. His muster out of the service took place at Goldsboro, North Carolina, and a feature of his journey home was the fact that his passage through Washington, D. C., was the very night of the assassination of the martyred Lincoln.

Upon reaching home Mr. Kirkpatrick entered high school at Beuton, for a time wishing to add to his education, but soon discontinued his studies in order to engage in business, his uncle, LeRoy Kirkpatrick, having invited him to become a partner with him in the conduct of a store at Du Quoin, Perry county. This partnership continued for a number of years, when Mr. Kirkpatrick and his two brothers purchased the uncle`s interest in the business, the new firm pursuing the enterprie for two years. Later our subject entered the mercantile business at Benton, remaining there for a time, and subsequently he conducted a store at West Frankfort. This last venture, however, closed his career as a merchant, and from that time on he devoted his energies, to other lines of endeavor. Having decided to engage in new work he likewise thought it best to make a change in location and he accordingly moved to Kansas, negotiating the purchase of a newspaper at Osage Mission. This paper he continued to edit and conduct for a number of years, achieving conspicuous success in this, as in all other commercial efforts he had made. Disposing of the Kansas paper Mr. Kirkpatrick removed to St. Louis and there became a manufacturer of linseed and castor oil. This city furnished the field for profitable operations in that line for some years, but journalism again called him and returning to his native community he bought the Benton Republican and was its editor and proprietor for several years. In the meantime Mr. Kirkpatrick accumulated considerable property, and among his holdings is a valuable farm in Franklin county. His property demanding much attention, he sold the Republican and turned his attention to stock trading and agricultural pursuits. Among his extensive land holdings also are vast coal rights and he, together with John T. Chenault and Robert R. Ward, are the promoters of the Benton, Franklin County, Coal Company which it is expected ultimately will actively develop the coal mines owned by these gentlemen.

Mr. Kirkpatrick's political activities have been and are of an important character. He is an enthusiastic worker in Republican party ranks and was elected to the Illinois State Legislature as a member of the house body in 1904, an office he has held four terms in succession and still occupies. In point of length of service he is one of the oldest members of the Legislature and this fact, combined with his pronounced

ability and comprehensive information, have gained for him membership on many of the most important committees of the legislative body. Among these committees may be mentioned the senatorial apportionment, of which he is chairman; appropriation, claims, corporations, good roads, mines and mining, railroads, roads and bridges, soldiers and sailors home, and temperance.

The marriage of Mr. Kirkpatrick occurred on August 6, 1865, on which date Miss Martha E. Penny became his wife. She was the daughter of James Penny, a native of Tennessee who came to Illinois in the early days, in which latter state Mrs. Kirkpatrick was born. Of this union there are five living children: Guy C., an express messenger in a western state; Terzie, the wife of Robert R. Ward, the well known banker of Benton; Beulah, wife of Carl D. Pope; Robert J., a graduate of the state university at Champaign, who is now a trusted employe of a large machine shop at Claremont, New Hampshire; and Olin P., at present a student of the Agricultural College at Columbia, Missouri, Mrs. Kirkpatrick, who is a member of the Missionary Baptist church, is a woman of gracious and womanly character and is held in high esteem by a host of friends. Mr. Kirkpatrick is a member of the Elks lodge and also of the Masonic order, serving in the latter as master for about fourteen years. His ability as a leader and his many fine personal traits, as well as his success in commercial fields and integrity in official life, entitle him to the highest respect of the entire community and state, throughout which he has a legion of friends.