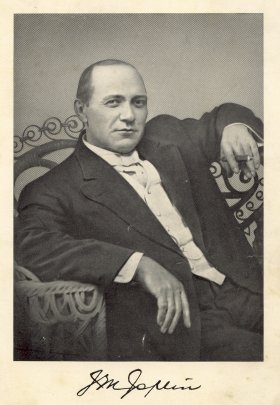 JAMES MCDONALD JOPLIN. In the death of James McDonald Joplin on February 17, 1911, Benton, Franklin county, Illinois, and in fact the whole of this section of the state, suffered an irreparable loss, his demise marking the passing of a man who was at all times during his life in the forefront in all affairs which tended to make for the highest development and upbuilding of this section. In a professional way Mr, Joplin was known as one of this locality's most talented and successful attorneys-at-law, while his long and faithful service in various official capacities in the city and county served to still further enhance his fame and he was known to thousands of people in his part of the state as a man of comprehensive talents and unimpeachable personal integrity.

James McDonald Joplin was a native of Franklin county, Illinois, his birth having occurred near Benton on December 3, 1866. The Joplins were early pioneers in Southern Illinois, the parents of James McDonald, whose names were Howell T. and Anna (Dial) Joplin, having come from their native state of Tennessee to Franklin county in an early day, living here until the time of their death. Mr. Joplin, senior, was a veteran of the Civil war. The son James spent his boyhood days on his father's farm, attending school and participating in such work and amusements as ordinarily fell to the lot of the farmer's boy in those days.

After his student days were over Mr. Joplin became a teacher in Franklin county schools, pursuing that profession for several years. He gave up that work finally, however, to discharge the duties of clerk of the county court of Franklin county, to which office he was elected in November, 1890. He filled that office with great efficiency for a period of four years and after retiring from the position took up the study of law and was admitted to the bar of Illinois in 1897. A year later Mr. Joplin formed a partnership with D. F. Moore at Benton, and the firm handled a lucrative legal business for two years. Mr. Joplin then purchased an interest in the real estate and abstract business of Judge W. F. Dillon, and these two gentlemen continued to conduct the office for two years, when Judge Dillon retired from the firm, selling his interest to W. F. Spiller the business was accordingly conducted until 1909 under the firm name of Joplin & Spiller.

In 1906 Mr. Joplin became the Democratic candidate for Congress in the Twenty-fifth Congressional District of Illinois, and notwithstanding the district was very largely Republican in sentiment, he ran far ahead of his ticket, and, although defeated, was stronger in the affection and esteem of his friends than before entering the campaign. In 1907 Mr. Joplin accepted the nomination for mayor of Benton, was elected and made one of the most efficient officials the city ever had in that position. One of the practical monuments of his term as mayor is Benton's excellent sewer system, for the securing of which the city is directly indebted to him more than any other individual. In the May, 1909, term of the circuit court Mr. Joplin was appointed by judge Creighton as master in chancery, which position he held at the time of his death. Mr. Joplin was an indefatigable worker, an interesting and forceful speaker, true to a trust, competent and courteous and discharged his duties in every official position he ever held with great credit to himself and entire satisfaction to his constituents and the public at large.

He was a man of large sympathies and broad interests, and was

always a potent factor in movements of every description inaugurated to serve the public good. In 1898 Mr. Joplin was elected captain of Company F, Ninth Regiment, Illinois Volunteers, in the Spanish-American war. He accumulated a considerable fortune during his life and at his death bequeathed a large estate to his family.

On November 20, 1889, occurred the marriage of Mr. Joplin and Miss Mattie Taylor, a daughter of Richard H. Taylor. Mr. Taylor was born at Taylor Hill, Franklin county, and died from the effects of a wound which he received in the Civil war, he having been a member of Company F, Eighteenth Regiment. Mr. and Mrs. Joplin became the parents of six children: Clarence D. is engaged in the farm loan business; Perna C. in high school here; Percy M. attends a business college at Marion; Ruth E. is a schoolgirl, as is also Anna, while the youngest, Jama Marie, is not of school age. Mrs. Joplin is one of the leaders of social and religious life here. She is a member of the Primitive Baptist church, and belongs to the Eastern Star, Rebekah and White Shriner lodges.