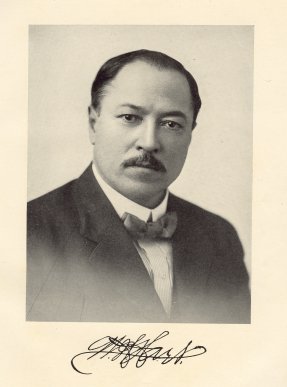 WILLIAM H. HART. In the ranks of the legal profession in Franklin County it is safe to say that no name is better or more widely known that that of William H. Hart, former county judge and now conducting a most successful partnership with Walter W. Williams, the same constituting a combination of professional ability second to none hereabout. Extensive as his practice may be, Mr. Hart's interests are by no means limited to it, for he is identified in an important manner with the coal commerce, his legal associate also being with him in this enterprise, which is known as the Hart-Williams Coal Company, Mr. Hart holding the offices of secretary and treasurer.

William H. Hart is a native of Williamson County, his eyes having first opened to the light of day within its pleasant boundaries on August 31, 1862. He is the son of William Jasper and Sarah Ann (Murphy) Hart, the former of whom was born in Kentucky and the latter in Indiana. They came to Illinois at an early day, when the state was still wild and the Red man still claimed it as his own hunting ground, and here they lived their wholesome useful lives, carving a home out of the wilderness and laying the paths of civilization straight and clean. The father was a farmer, it goes without saying, and he was prominent and honored by his neighbors, affording in his own life a worthy example for the young men of his acquaintance. He was, nevertheless, quiet and unassuming and took no decided part in politics and public life. He was a Democrat in his political faith. The mother was a devout member of the Missionary Baptist church and a worthy and admirable helpmeet for her pioneer husband. The subject's grandfather was an early settler in Kentucky and was unknown by him, the older gentleman's demise having occurred before his time. The mother's family, the Murphys, were early Hoosier settlers.

Mr. Hart received his first introduction to Minerva in the Franklin County schools and entered upon his career as a wage-earner in the

capacity of a teacher. For ten years he engaged in a pedagogical capacity, but during most of that time he was arriving at the conclusion that he wanted to be a lawyer and later effected his preliminary studies. He taught in several localities in Franklin, Jackson, Randolph and Monroe counties, and always with satisfaction to all concerned, for he had an enlightened idea of the duties of a preceptor. In 1890, while engaged in teaching, he met and married Mary W. East, a pioneer of Coulterville, Illinois. Mrs. Hart was also a teacher and received her education in the Carbondale Normal School. To this union a fine quartet of sons and daughters have been born, namely; William W., Marion M., Mary M. and Mable E. All of them are in attendance at school, and William W. graduated from the township high school with the class of 1912.

Mr. Hart attacked his Blackstone under the able direction of Daniel M. Browning, and to such good effect that he was admitted to the bar in February, 1889. Subsequent to that he entered the office of Browning & Cantrell, and remained thus engaged until Mr. Browning was made commissioner of Indian affairs during Cleveland's administration. He then formed a partnership with W. S. Spiller, and remained with that gentleman in successful practice until Mr. Hart's high standing as a lawyer and citizen received signal recognition by his election to the county judgeship in 1898. He served one term and then reentered the active practice of law. He now enjoys one of the largest practices in all Southern Illinois, and he has been connected with a great deal of important litigation. He has always been a Democrat since he had any ideas upon the subject or was old enough to have the right of franchise, and he is influential in party councils. From 1900 to 1902 he was a member of the State Democratic Committee. He formed a partnership with W. W. Williams in 1906, which partner ship still exists. Their important connection with coal mining has been previously noted.

Mr. Hart is a Mason, belonging to the Chapter and being very popular in the time-honored order. He and his family are members of the Christian church.