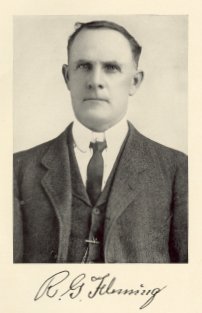 RICHARD G. FLEMING. The country in general is recognizing the definite relationship of the farmer to modern civilization, for he is at the focus point of civic forces and the great living currents of life eminate from him and his work. Because of the strenuous life a farmer is forced to lead it is necessary for him to provide for an early retirement, on account of the drain made upon his strength during all seasons. For this reason the thrifty farmer makes his arrangements to retire from the scene of his earlier labors, and in his resulting days of leisure goes more deeply into civic matters than he was able to when the demands of his farm absorbed all of his attention.

One of the men who has worked unceasingly in order to provide for a comfortable old age is Richard G. Fleming, president of the First National Bank of Johnston City, Illinois, who spent a third of a century on the farm. He was born in Logan county, Kentucky, June 26, 1851, but was brought up in Trigg county and educated sparingly in the subscription schools. His education was necessarily neglected owing to the rather indigent situation of the family, and also because of lack of facilities for the children of the rural districts in ante-bellum days. In 1871 his father, William A. Fleming, took his family overland to Texas, following a little drift of Kentucky citizenship to the Lone Star state, but conditions in the northeast section of that commonwealth, where he had intended to locate, were unfavorable and he decided to return to Kentucky. Having a brother in Illinois, he drove through to this state, and while visiting in Franklin county he was induced to stay and make a crop and to rest from his long journey. Farming conditions were then more favorable in Illinois than in Kentucky, and prospects seemed brighter for the future, and he decided to remain here, and subsequently he spent the rest of his life in this section, dying at the age of sixty-six years, during the seventies. He was a native of Sumner county, Tennessee, and when approaching manhood accompanied his father, Beverly Fleming, to Illinois, settling in Williamson county, where he enlisted in the army and served during the Black Hawk war, and also was an Indian fighter in Florida. In political matters he was a Democrat, and his religious faith was that of the Methodist church.

Beverly Fleming was born in the state of North Carolina, and died at Crab Orchard, Illinois, in 1867, when more than eighty years of age.

He married a Miss Aspley, and their children were ten, in number, those to raise families being: William A., who died in Johnson county; John, who passed away in Alabama; Jacob, who spent his life and died near Union City, Tennessee; Margaret, who married a Mr. Shackelford and died in Kentucky; James, who died at Paducah, Kentucky, in February, 1862, as a Confederate soldier; William A.; Samuel, who died in White county, Illinois; and Rebecca, who became the wife of John Deering and died in Kentucky. William A. Fleming married Mary Byrn, a daughter of John Byrn, of Sumner county, Tennessee, whose people were from North Carolina, and she died in 1896, at the age of eighty-two years. Their children were as follows: John and David, of Johnson county, Illinois; Richard G.; Maggie, who married Dr. Joseph Walker and resides at Hot Springs, Arkansas; and James, who is carrying on agricultural operations in Johnson county.

Richard G. Fleming remained under the parental roof until he was twenty-four years of age. He then married and purchased an eighty-six acre farm near the site of Johnston City, and was busy with the various affairs that go to make up a successful life. His efforts were made to prosper and his substance was made to multiply, independence coming to him long before the ground under him was known to contain coal. In 1908 he leased his farm to the Carterville District Coal Company, as a mining proposition, and under their direction it is yielding up its daily output of carbon. Having consented to convert his farm into a coal mine, Mr. Fleming decided to locate in Johnston City, and in 1908 he established his family here. When the First National Bank was organized Mr. Fleming became a stockholder, and was soon made a member of its official board. In 1909 he was chosen president of the bank, as successor to J. S. Lewis, of Carbondale.

On October 27, 1875, Mr. Fleming married, near Marion, Illinois, Miss Mary E. Newton, a daughter of Henry and Sarah A. (Barham) Newton, the former a native of North Carolina and the latter of Tennessee. The Newton children were Mrs. Fleming, and Thomas, George, John and James Newton, of Williamson county. The children of Mr. and Mrs. Fleming are: John, a farmer of this county, who married Ollie McDonald, and for his second wife Miss Ora Skaggs; Maggie, who married Samuel Auhls, of Marion; Thomas, who is engaged in farming near Marion, married Lucile Skaggs; and Alice, Minnie, Bessie, Newton and Hugh, all living at home. Mr. Fleming brought up his family under a church influence, being a member of the Missionary Baptist denomination. Although a Democrat, he has taken no part in practical politics.