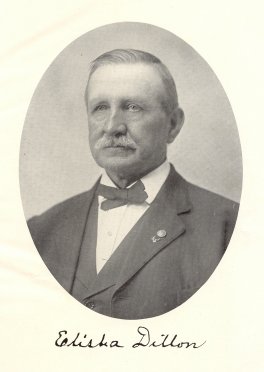 CAPTAIN ELISHA DILLON. The life of a successful man is an interesting study. When one comes in frequent contact with such a man his characteristics, his manner of doing things, as well as the evidences of his ability, seem to all work in harmony to make what the world names a great man. When one reflects upon these various points, the blending of them all into the man himself makes the study more difficult.

But one cannot fail to see distinctly the bold lines which denote success. With no one do these lines stand out more prominently among the so-called successful men of Franklin county than with Elisha Dillon, who for years has been closely identified with the business and financial interests of the city of Benton. Mr. Dillon is a product of Franklin county, and was born August 19, 1842, a son of Captain William B. and Margaret (Eubanks) Dillon, natives of Tennessee.
Isaac Dillon, the grandfather of Elisha, was born in Virginia and at an early day moved to Tennessee, from whence he came to Illinois, where his death occurred. He came of Irish ancestry. William B. Dillon was born in Tennessee, in 1809, and he was eleven years of age when he accompanied his parents to Williamson (now Franklin) county, Illinois. He was a blacksmith, farmer, carpenter and general jack-of-all-trades, and among other things made all the coffins used in his neighborhood for many years. He was a justice of the peace for forty years, and when John A. Logan practiced law in Benton he frequently had a case for trial before Justice Dillon, At times the office would not accommodate the crowd gathered, and court then adjourned to a nearby large oak tree. Until 1870 Mr. Dillon resided on his farm, but in that year went to DuQuoin, and subsequently to Tamaroa, Perry county, where his death occurred when he was eighty-seven years of age. He organized and served as captain of Company I, Fifty-sixth Regiment, Illinois Volunteers, until he was attacked by typhoid fever and was obliged to resign his commission and return home. Not alone he of his family served in that war, but his three sons, Elisha, John and James, all offered themselves to their country in the cause of the Union, James was mortally wounded at Shiloh and died a few days afterward, while John died after the close of the war as a result of an illness contracted while in the service. The parents of William B. Dillon's wife were farming people of Tennessee who became early settlers of Franklin county and here spent the remainder of their lives.
Elisha Dillon, the only one of the three brothers to survive the Civil war, received the rudiments of his education as a lad in an old log schoolhouse with a clapboard roof, one door, no windows, a huge fireplace in the middle of the room, and seats made of roughly hewn logs. He was just about ready to enter the public schools at Benton when the Civil war came on, and he enlisted in his father's company, becoming its first sergeant. At the time of his father's resignation, enforced through serious illness, on August 18, 1862, the son Elisha was promoted to second lieutenant, and on August 31st of the same year was made captain of the company. He was at the siege of Corinth in April, 1862, and on October 2d, 3d and 4th took part in the three days' battle at Corinth, where his sword shield was struck and badly damaged by a bullet. He was with Grant at Holly Springs and Oxford, Mississippi, participating in several sharp skirmishes, one with bushrangers being especially severe. On December 24th and 25th, during a heavy rainstorm, his company, as a part of Grant's command, marched from Oxford, Mississippi, to Memphis, and, during that time without anything to eat and having no tents or shelter on the banks of the river, they were compelled to sleep in the rain both nights. The weather suddenly changed and their clothing was frozen to their bodies. Captain Dillon served with distinction at Champion Hill and Black river, and in the siege of Vicksburg was in the assault on the Rebel works May 23, 1863, and in the fighting was knocked down by a Rebel shell. It was there that he contracted the illness which made his resignation imperative.
After his return to civilian life Captain Dillon went to DeWitt

county, Illinois, and with a few hundred dollars which he had been able to save purchased one hundred acres of land, making a first payment with the amount. Then he settled down to follow the peaceful life of an agriculturist. Progressive in all things, Captain Dillon was the first farmer to use tile in his section of the country, and he made one of the finest farms in the section, later selling his holdings for forty dollars an acre, at that time the highest price ever paid for land in that locality. Captain Dillon first came to Benton in 1883, in which year he established himself in the mercantile business and continued therein for two years. But not liking the business he began loaning money and buying tax titles, an occupation which he has since carried on with great success. He has a beautiful home in Benton, where he owns considerable property and is looked upon as one of the substantial men of the city.
In 1862 Captain Dillon was married to Miss Laurenda Maddox, daughter of James Maddox, who was an early settler of Franklin county, and she died in 1863, during which same year he was married to Miss Olive Martin. Mrs. Dillon, who was a daughter of Samuel Martin, an early settler of DeWitt county, died May 12, 1888, leaving one child, John S., who was second lieutenant of Company F, Ninth Illinois Regiment, during the Spanish-American war, and is now the editor of a newspaper at Oxford, Ohio. Mr. Dillon's third marriage occurred January 15, 1893, when he was united with the widow of his cousin, Captain W. J. Dillon, of Company C of the gallant Eighteenth Regiment, who was killed at Shiloh. Captain Dillon was a law student of John A. Logan, and was county judge of Franklin county when the war was inaugurated. He resigned to enlist and was made first lieutenant of his company. For gallantry at Belmont he was promoted captain of his company. He was first wounded at Fort Donelson, but, with his wounded arm in a sling, rejoined his regiment in a short time and met his death at Shiloh. His widow was made an honorary daughter of the Eighteenth Regiment, as being the youngest widow of the regiment. Her maiden name was Hettie A. Duncan, daughter of John R. and Jane (Riddell) Duncan, and a direct descendant of Queen Isabella of England, of whom history has it that "From King John and Isabella every sovereign who has since sat upon the throne of England is descended." Mr. Duncan was born in Maysville, Kentucky, and all his ancestors served in both the Revolutionary war and the War of 1812. Mrs. Dillon's grandfather was an orderly to General Jackson at the battle of New Orleans, The Riddell family traces its ancestors back to the year 886, A. D., to the Earl of Angonlesme and Piragord of France, ancestors of Queen Isabella. Mrs. Dillon was a step-daughter of Hon. Walter S. Aiken, prominent in Southern Illinois, he having served as postmaster of Benton, as judge of Franklin county and as a member of the Illinois legislature. As her mother was an invalid the daughter, then a young girl, assisted in entertaining many noted guests at the family home, including Governor Yates, Governor Oglesby, General and Mrs. Logan, General and Mrs. I. N. Haynie, Judges Breese, Marshall and Allen and other noted personages. From the time of their first meeting at the, old Logan home here Mrs. Logan and Mrs. Dillon have retained the warmest friendship for each other. Mrs. Dillon, then a young girl, was the Logans' guest when Senator Douglas made his memorable visit to Benton. Mrs. Logan has accorded Mrs. Dillon a place in her forthcoming book, "The Part Taken by Women in American History." Mrs. Dillon is prominent in social affairs, a member of the Methodist Episcopal church, of the W. C. T. U. and of the Self Culture Class of Benton.

Captain Dillon is senior vice commander of the Southern Illinois Soldiers and Sailors Reunion Association, the largest organization of ex-soldiers in the world, which was established twenty-nine years ago and holds reunions every year, at which time there is an attendance of from ten thousand to fifteen thousand people. He organized the G. A. R. post here and was its first commander. A stanch Republican in political matters, his first vote was cast for Abraham Lincoln for president in 1864. When the offices of the Franklin County Chronicle were destroyed by fire, August 23, 1893, he showed his loyalty by purchasing a new press, naming it the Benton Republican, and in December of the same year the paper issued its first edition. Captain Dillon was collector of his township in DeWitt county for three years when the township was largely Democratic, but he was elected each time on the Republican ticket. In 1876 he was candidate for the office of sheriff of DeWitt county, on the Republican ticket, but owing to political conditions at the time he met with defeat, although by only a small margin. He has on numerous occasions served as delegate to state and county conventions, and in 1892 was made county chairman and re-elected in 1894 for two more years (that year marking the first time Franklin county ever went Republican). He was made special sergeant to the convention in 1896 that nominated McKinley for the presidency, in 1896 also was made chairman of the senatorial district, and in 1898 two Republican representatives were elected for the first time in the history of the district. He is now serving as treasurer for the Republican central committee, and for a number of years has acted as public administrator of Franklin county. During the Spanish-American war he organized a company for the regiment named for the Chicago Press Association and received a captain's commission from the governor, but the division was not needed and never went to the war. In fraternal circles Captain Dillon has been for forty-two years an Odd Fellow, and is a charter member of the Elks lodge in Benton.
As a soldier, as a business man and as a citizen Captain Dillon has proved himself a thoroughly representative citizen of Illinois, and well merits the respect and esteem in which he is held by his fellow citizens.