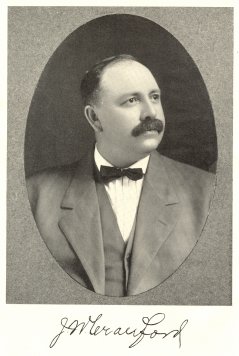 HON. JAMES W. CRAWFORD. The farming districts have given to Southern Illinois some of its ablest public men, who, born and reared among the agricultural people and knowing their needs and the needs of their communities, have been able to serve them to the best advantage and to forward measures calculated to develop the vast resources of this rich section of the state. In this connection may be mentioned James W. Crawford, ex-member of the State Legislature, whose record in that august body stamped him as a man of eminent ability and a citizen whose best energies were devoted to the welfare of his community. Mr. Crawford was born in Franklin county, Illinois, December 3, 1866, a son of John Wesley and Serena M. (Bonds) Crawford.

John A. Crawford, the grandfather of James W., was born in 1803, in the state of Alabama, and came to Illinois in 1827, at a time when this locality was but sparsely settled, becoming one of the leading agriculturists of his day. His death occurred in 1893, when he had attained the advanced age of ninety years. His father, Thomas Crawford, was a soldier under Andrew Jackson and was in the battle of New Orleans, where he had his right thumb shot off. John Wesley Crawford was born in Franklin county, in 1840, and served four years as a private in Company F, Sixty-third Regiment, Illinois Volunteer Infantry. He was wounded at the battle of Shiloh, spent four months in the hospital, and after his return to his regiment was honorably discharged in 1865. On his return from the war he purchased a farm in Franklin county, and there resided until his death, in 1900, a well known citizen and active Republican. In religious faith he was a Missionary Baptist. He married Serena M. Bonds, who was born in Missouri in 1841, a daughter of James Bonds, who, also born in Missouri, brought his family to Franklin county in 1863, and died in 1877, after many years spent in agricultural pursuits.

James W. Crawford's early educational training was secured in the common schools of Benton, where he also attended high school, and he then spent two years in the seminary at DuQuoin. After spending some time as a school teacher in Texas he became a law stuent in the office of Judge W. F. Ford, of Texas, and in 1895 was admitted to the bar, locating in Benton in 1898. Until 1905 Mr. Crawford was engaged in farming, but in that year entered the office of W. S. Cantrell and began the practice of law, having charge of the real estate end of the business, and until August, 1911, continued in the office with Mr. Cantrell and W. H. Williams. Since that time he has represented the Federal Life Insurance Company, of Chicago, for Southern Illinois, and in this line has achieved a large measure of success. He owns two hundred and eighty-five acres of land two miles west of Benton, and there he makes his home. For a number of years Mr. Crawford has been a hard worker in the ranks of the Republican party, and is known throughout this section of the state as a campaign speaker, and in 1908 his services were recognized and rewarded by election to the State Legislature, after an uphill fight. During his term of office he served on the committees of corporations, drainage and waterways, primary elections, railroads, reform, statutory revision and judiciary, and was chairman of the judicial apportionments. He was a leader among the new members of the Assembly, and the needs of his constituents were always uppermost in his mind.

In 1890 Mr. Crawford was married to Miss Louisa M. Almond, daughter of Alvin M. Almond, a native of Mississippi, who removed to Arkansas and there died, and the following children have been born to this union: Clarence A., who is associated with the United Coal Mining Company at Buckner, Illinois; Vida, who is engaged in school teaching; Ora, Ollie Belle, Emmet, Lois and Fay, who are all attending school; and Charles, the baby. Mr. Crawford is a member of the Missionary Baptist church, while his wife is affiliated with the Methodist church. He is a Chapter Mason, has passed through the chairs in the Odd Fellows, and belongs to the Knights of Pythias, the Elks, the Woodmen and the Court of Honor. With an excellent record as a public official, known as a shrewd, capable business man, and as a farmer who is getting the best results from his excellent property, Mr. Crawford is one of the most influential residents of his community, and ranks high among Southern Illinois' representative men.