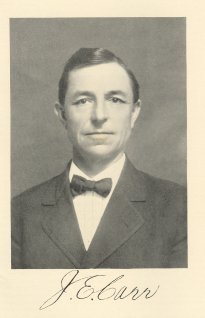 JOHN E. CARR. As a leading member of the Williamson county bar, with a field of practice at Johnston City, John E. Carr has varied his professional career with sallies into real estate and with financial transactions as a promoter of banking enterprises at various points in the state, and has otherwise identified himself with the material and substantial side of life. Born near Parrish, Franklin county, Illinois, in October, 1867, Mr. Carr is a son' of John S. and Eliza (Estes) Carr.

John S. Carr, a farmer-mechanic, settled in Franklin county, Illinois, during the `forties, and died there in November, 1875. He was born in Wilson county, Tennessee, developed a genius for mechanics, became a gunsmith and combined it with farming after coming to Illinois. His father was Dr. Richard Carr, who was born and reared in North Carolina, came out to Tennessee with his six brothers, and was married (first) to Jemima Sawyer, who died after the birth of the following children: Wilson ("Docks') Carr, who never married, came over to Illinois and later went to Missouri, where he invented the now famous "Missouri Meerschaum," and died in Macedonia, Illinois, when about ninety years of age; Allen, who left a family at his death at DuQuoin, Illinois; Thomas R., a tailor, followed a desire to go to Europe shortly after the Civil war, spent several years in France, where he was married, and returned to the United States a childless widower, his death occurring at St. Charles, Illinois; John S.; Mrs. Thomas Trovillion, who spent her life in Pope county, where she died, leaving a family; and Sarah, who married Elisha Compton and died near Macedonia, Illinois, having a family. Dr. Richard Carr was married a second time, and three children were born to this union; Eliza, the wife of Thomas Austin, of Creal Springs, Illinois; Betty, who married a Mr. Wrenshaw, of Pope county, where she died; and "Peter," who became the wife of James Ferguson and passed away in the same county.

John S. Carr married Eliza Estes, a daughter of Laban Estes, a pioneer of Franklin county from Tennessee, and she died from the kick of a horse in December, 1894, having been the mother of the following children: James and Charles, who are living in Franklin county; John E., Ernetta, the wife of Charles Rains of Frankfort, Illinois, for many years a teacher in this section; and several children who died in infancy.

John E. Carr attended the Hayes school, as his home district was

called, then the graded schools of Crawford's Prairie, and finally the Lebanon, Illinois, institutions. Having come up under country environment, he was unable to free himself from the farm until past his thirtieth year. Mr. Carr prepared himself for the law by three years of reading in the office of Judge W. H. Williams, of Benton, and was admitted to the bar on examination at Mount Vernon in 1896. He utilized every opportunity to adapt himself to his prospective profession, in literary societies in the country and in ``mock courts," and even in actual lawsuits before the country justice, his first case in court being one in which he volunteered to defend a country youth who was charged with disturbing the peace. Still an understudy at the bar, he faced two talented but unlicensed officials as prosecutors, and a court that was less wise than he looked. Replying to the proposition of the prosecution to separate the witnesses, Mr. Carr quoted the law holding that witnesses should not be separated save in capital offense. This court sustained this position as being the law and in the jury trial which followed the boy was cleared. In the spring of 1897 Mr. Can- came to Johnston City and opened an office for practice and has maintained one here since. Much of his civil business has arisen from relations of employed and employer in this industrial community and his legal work covers a multitude of causes of no interest save to the litigants themselves. He has taken advantage of the growth of Johnston City to deal in real estate and early in the history of the city he joined Mr. Ed Duncan in platting and exploiting an addition called Duncan's First Addition. Following the success of this, the gentlemen began dealing in coal lands and in handling many large deals for the time earned a reasonable profit for themselves. He subsequently dissolved with Mr. Duncan and has continued buying and selling, building business houses and residences and taking generally an active part in the material growth of the town. The rather sudden acquirement of capital led Mr. Carr to enter the. banking business. He promoted, with others, the first financial institution in the city in August, 1894, the Johnston City State Bank. He is attorney for the Citizens State Bank here, and helped to organize it; organized and operated for a time the West Frankfort State Bank, the First National Bank of Westfield, of which he was the first president; was the first president of the Dahlgren State Bank, Dahlgren, Hamilton county, and its organizer; and this was the first state bank of that county; a private bank at Joppa, Illinois, the first bank of the place; a private bank at Cypress, Illinois; the Farmers Bank at Pulaski, Illinois; the Bank of Brownstown; the Peoples Bank of Loogootee, Illinois; the Bank of Simpson, Johnson county; the Farmers Bank of Oakdale; the Citizens Bank of liagerstown; and the Farmers Commercial Bank of Fordyce, Illinois. He is still interested in a few of these institutions. Mr. Carr is a Republican. His relation to party matters in Williamson county has been merely that of an interested spectator, while in his native county he was for many years chairman of his township committee, for a long time a member of the county committee, and was chairman of the county convention which first endorsed the candidacy of Senator Hopkins and declared for Mr. Roosevelt,_the first county to do so in Illinois. He served Johnston City as its attorney for several years, and fought its legal battles of various descriptions through the early years of its municipal history. On December 24, 1902, Mr. Carr was married in Mount Vernon, Illinois, to Miss Flore A. Burton, a daughter of W. R. and Margareitte (Tolly) Burton, of Dahlgren, Illinois. Mrs. Carr is the oldest of three

children, the others being: Mrs. Ada Lockett, wife of ex-County Clerk Lockett, of Hamilton county; and J. Otowell Burton, for many years postmaster at Dahlgren. Mrs. Carr studied music in Ewing College and later took further instruction in Missouri, and is an accomplished player and vocalist.